Glacier presents some great photographic opportunities, talk about it here.

Lets see if this works. A shot from this year's trip.

Thanks Angela and Paul. Yeah, that's the Notch. I was going to make a joke about how I sat in a lawn chair and flew a drone up there, but that might not be funny to too many people.

I took the non-climbing route of the Highline Trail. It's long, it's tedious, it can be a bit dangerous, but I wanted to do it this year. I have a trail report ready but it's still waiting for the editor to get back to me. (I pick her up from the airport tonight.)

Here's one more. I call it, the "Slinky little thing."

I was, and I still am STUNNED regarding your day hike to Iceberg notch.
I doubt most people have the slightest idea just how difficult that hike was.
26 miles and God knows how much elevation gain and loss between the Swiftcurrent Inn and Iceberg notch--and back.

I tried getting up there twice hiking out from Granite Park Chalet. Both times the WIND was just too much for me after getting to Ahern Pass.
Boulder hopping and scree walking on that very steep slope would be difficult for me on a good day. Chancing it on a windy day hiking alone was just too risky for me.
So I genuinely admire you for getting that trip done--safely.
Well done Jay!!

I will miss you my friend. Come down to Florida when you retire and we'll fid something to do.

best to you and Julie!

Thanks Pete. Yeah, my Garmin recorded 5700 feet of vertical. Even on a bike, that's a pretty good day.

I have a shot of the scree field from my lunch spot at Ahern Pass, but it doesn't show the boulders or give a sense of how far up it is to the notch. (Left top center.) There's a goat trail on the bottom left but I don't know if that hooks up with famous (infamous) goat trail from Ptarmigan Tunnel. 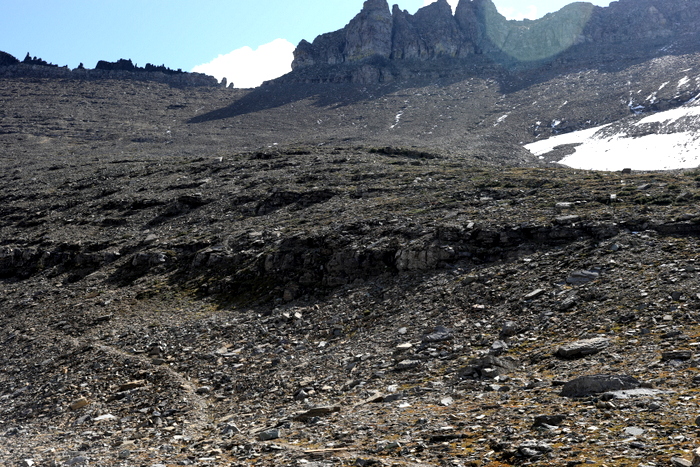 Looks pretty easy from here doesn't it? In terms of "climbing," it's not a climb. Just work.

On the previous trip, I got back to the Ahern Drift and thought, "This looks more dangerous than a thought." (Imagine snow covering this scene and a tread across the snow.) 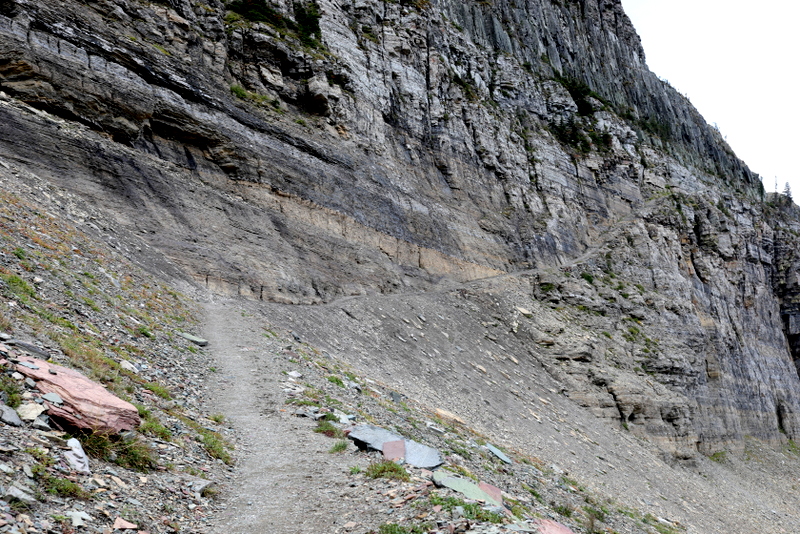 I grabbed two rocks and started shimming across the snow sideways. Then a gust of wind came up and blew my hat up the snow and over the lip between the snow and rock wall. That pissed me off, so then I climbed up a 100 feet or so (outside the left corner in the photo), grabbed my hat and then across (above the trail along the wall of rock) and found I couldn't get down to the dirt trail. It was too steep. So then it was more climbing (with the rocks) to retrace my steps. My point here is that I blew probably a solid hour farting around getting back across Ahern Drift....and still made it back to camp soon enough that Julie didn't give me crap for being late. I have a feeling I did some running. I used to run back then.

Pete, I'm sure we'll meet up again. Julie likes beaches, and I haven't spent much time in Florida. I'd like to see the Key's someday. Some winter day.

I am with Pete. This is an amazing accomplishment, Jay, to have finished this hike and climb from the Many Glacier Campground and back! It would be hard enough from the Chalet and back.

Jay, the goat trail you point out from your lunch spot does not lead to the infamous goat trail from Ptarmigan Tunnel. It peters out to loose rock. Someone can correct me if I’m wrong, but I’m not sure if there is a good way down to the other side of Ahern Pass toward Helen Lake now that the glacier has receded as much as it has.

I think it’s hard to appreciate the steepness of the terrain on the downward slope from the Ahern Drift without seeing it in person. Jeff Kuhn, a geologist and former Belly River backcountry ranger, told us stories of rescue missions that resulted from hikers losing footing on the snow and ice while trying to make it through the Ahern Drift with snow still on the trail. That Diorite Sill wall in your photo on the uphill slope just past the Ahern Drift is one of the most fascinating places I have experienced in the Park after having Jeff Kuhn explain the geology and makeup of the rock that we were seeing, That wall contains rhodochrosite, marble, quartz, and much more.

Ahern Pass and its environs is an amazing place! And the Iceberg Notch a fantastic accomplishment. Hats off to you, Jay (but don’t lose your hat around the Drift before it melts or has been blasted).
Top

Hey thanks Tina. It's good to know I couldn't hike down to Helen. It looks so doable. Also, I number of years ago, I remember hearing about a hiker falling by trying to pick up the goat path from Ahern to Ptarmegan. So I half heartedly looked for a trail that might be the offender.

My memory may have been bad because the article doesn't really he couldn't find the trail and got in trouble. (My brain making up crap.) It could easily be that he found the trail and simply made a bad move or had a slip. I don't think the details are there (I found a couple other articles that have very similar wording).

Years ago, I was on the goat trail above Helen lake heading toward Ahern pass. At that point, the trail is as wide and as good as any real trail in the park. We stopped short of Ahern drift snow field but it looked like the trail went directly below it and there were some cliffs and maybe goat trails from there leading up to the pass. I wish we had spent the extra time to go all the way to the drift so I could have gotten a better look and investigate if it was a doable.

I know typically the path is to follow the goat trail to the drift and then hike/climb carefully with ice axes on the snow to the pass. But that snow field looks pretty gnarly to me.
We are in the mountains and the mountains are in us. - John Muir
Top

That's good info Paul. I think I get the picture. The goat trail leads you to a point below the pass and you have to climb up to the pass. It sounds like normally you'd go up the snow/glacier, but (from Tina's post and confirmed by you) climbing that is not the easiest thing to do. My guess is that climbing loose rock is worse.

I went out a 100 feet or so on that goat trail (from Ptarmegan). Yup, not the type of hike I like to do. See that right there. Step there and you're dead.

Jay
The NSA...the only people in the government who listen.
Top
Post Reply
12 posts • Page 1 of 1